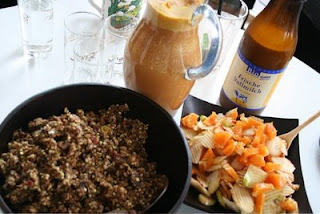 Last Sunday, I opened doors to the first brunch at the inofficial "b.alive raw café" at my little studio loft in Berlin Mitte. It was a great success. 11 hungry people showed up with sceptic faces wondering whether THIS raw food would actually fill them or if they need to go to have a Döner or Currywurst after. I think, noone had to :-) 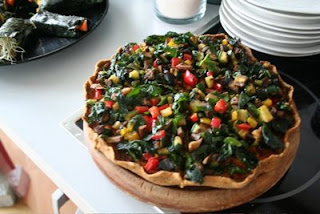 The raw pizza was definitely the brunch star. Everybody was surprised on how pizza can be raw until they figured out that the misterious black box in the corner was the magical tool: a dehydrator. This pizza was delicious, with a crust made from buckwheat and sun-dried tomatoes, a layer of fermented sunflower seed cheeze, another layer of marinara sauce and topped with a vegetable medeley of eggplants, zucchini, spinach and bell pepper that have been marinated in olive oil and Italian herbs for 24 hours. Everything together created a perfect combination of textures and flavours. 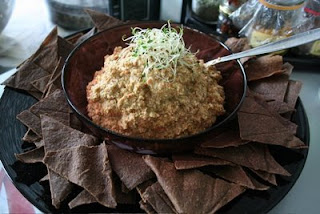 My personal favourite were the chocolate nachos with a walnut saffron paté. The chocolate in the nachos (made from a base of sunflower seeds and corn) gave them a bitterness which is well complemented by the sweetness and spicyness of the paté, made from walnuts, saffron, dried apricots, chilli and some other little secrets.

For the Nori Rolls, I used the fermented sunflower seed cheeze and flovoured it with Wasabi and Soy Sauce, used it as a filling together with raw veggies like cucuber, carrots, peppers, avocavdos and sprouts, et voilà, a beautiful vegan interpretation of a maki roll. 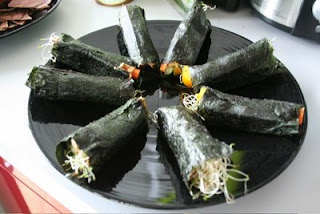 Everybody, including me, was happy and shining by the end of the brunch and left with an obvious abundance of radiating energy from their first living food experience. At least the grateful smiles told me so. I am already looking forward to the next event.

The b.alive podcast is born 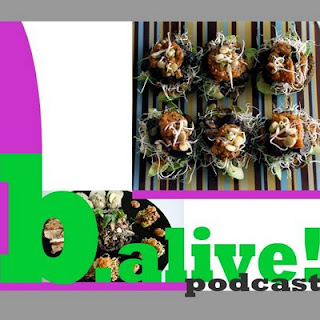 A long time has passed since my last blog post and an update has been overdue. Especially, since I finished this one already quite a while ago: My first podcast. Instead of writing about my food journey in San Francisco over Christmas and New Years, I decided to use this opportunity to experiment with podcasting instead. So here it is, the first episode of the b.alive podcast. Lean back, relax, listen and watch the photo stream and while you are doing this, I am hitting the keyboard to write up on Thailand where I spent my last month to deepen my massage practice and healing skills, reason for the delay in blogging :-)
No comments: