Is it a brownie, a deformed truffle, tiramisu...? 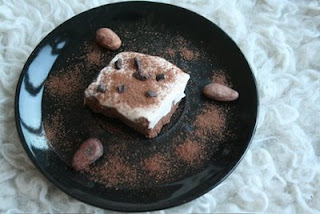 The question of last nights wonderful dinner party at my neighbours Michael and Philipp was: What is it? A brownie? A deformed truffle? A chocolate cake? A raw tiramisu? ... Well, it started off with the idea of trying to copy this wonderful walnut cherry and chocolate confection that I had for desert at Alive! in San Francisco. Friday night at 11pm, I suddenly was hit by an obsession to give it a try. So I threw some soaked walnuts, soaked dates, figs, cacao powder and nibs and some orange zest into the food processor. Not having the right powerful machine yet, the consistency first turned out way too gritty. And also way too sweet. So I let it run for a while longer. And I had added too much date soak water at some point, so it was getting too soft for being a brownie like consistency. I started forming truffles and rolling then in cacao. Tasting them, however, didn't convince me. So at this point (it was 1 am), I just put the whole bowl into the fridge and meditated over it in my dreams...

Next morning, I had it. I threw the whole thing into the more powerful blender, added some cashews, some melted down cacao paste and vanilla coconut cream, cold pressed coffee, lecithin, salt, lemon juice and inca berries, which took away the overly sweet taste of the figs and dates, brought out the chocolate and gave it a beautiful fruity note. I spread it into a casseruole and topped it with some runny cashew vanilla coconut cream made from cashews, vanilla coconutbutter, salt, agave and water. Et voilà:

The result was a delicious little caky, brownie, truflly cream something that had great success and everyone was quite surprised to learn that raw food does not have to mean munching on a dry carrot. We couldn't figure out the name thing.

But it doesn't matter, does it? Let's call it the Incan Chocolate Square? Or the truffly balive chocolate mousse cake?

It's all good, it was a chocolaty, fruity, nutty, creamy delight and everyone was happy and convinced that raw foods it something worth looking into a little closer :-)

A few other highlighs of this weeks kitchen experiments were the spaghetti bolognese and the Asian Kale and Eggplant Curry with dehydrated flax crackers. No time now to into details, since I have to get ready for my next trip: To Thailand. I am going to one of my favourite retreats The Sancutary on the island Koh Phangan to do an advanced course in Ayurvedic Yoga Massage. So watch out for some exotic travel reports from the Far East soon!

I promised to give you more on chocolate and I kept my promise, and there will be more, be sure of that!

Sawadee. And Hail to Chocolate :-) 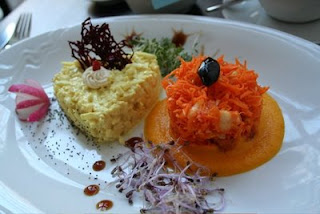 Coming back to Berlin from vegan's and raw foodist's heaven San Francisco, I was afraid, I would never be able to go out again if I wanted to keep eating a purely organic, vegan, rawfood diet. I should be wrong: Doing a little Google search on vegan and rawfood in Berlin, I came across La Mano Verde, a recently opened vegan restaurant with a partially raw vegan menu. Fantastic! And perfect timing, because opening up the link to their website the first thing that caught my attention was an upcoming raw food showcase event on the weekend of the 17th and 18th of January. Guest chef and health consultant Urs Hochstrasser offered exclusive 4 or 5 course raw food dinners and lunches. I had to go and compare to my recently acquired skills :-)
So I convinced my friend 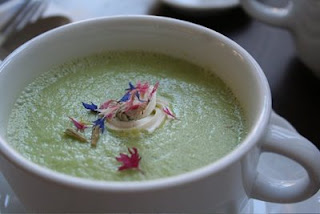 Roisin to spend the astronomical sum (for Berlin standards of course) of 25€ on a four course raw food lunch last Saturday. After our 25 minute trip out to Friedenau, we entered the very classy and tastefully furnished restaurant and were seated by owner and manager Jean-Christian Jury. After only a few minutes i could not help my excitement and introduced myself as a newly graduated raw food chef from the Tree of Life. I could see an uplifting smile in his face and throughout the entire lunch, we kept talking end exchanging experiences. He used to be the manager of the SAF restaurants (London, Munich and Istanbul). Chad Surno, the head chef of London's SAF, used to work at the Tree of Life! Jean's current chef Björn who was one of SAF's best chefs, came out from the kitchen right away to say hello as well. What an amazing connection, I felt at home immediately :-)
And then, when I mentioned I would go to Thailand for a month to do a massage course, Jean's smile opened up entirely. It turned out, he used to live there for many years and organized the first full moon party on Koh Phangan, the island where I will go to in a week to do an advanced course in Ayurvedic Yoga Massage at The Sanctuary, a beautiful resort on a secluded beach near Had Rin on Koh Phangan. I knew, I was on the right path!

But let's get to the food. The soup was a creamy blend of zucchini, served with a dollup of an almond paste that resembles a crème fraìche and some edible flowers on top. The taste was simple but delicious. 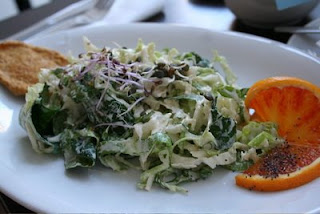 As a starter, we got served a farmers salad from endive, field salad and sprouts, tossed in a creamy macadamia nut dressing and served with a crunchy flax carrot cracker on the side.

The main course was a cauliflower curry, beautifully arranged in a heart shape with a web of dehydrated red beet shreds stuck in it. This was accompanied with a carrot pinenut raita on a carrot cream.

Desert was a mango coconut cream with marbled raspberry coulis.

The presentation of each course was very beautiful with lots of love for detail.

It all tasted delicious: subtle, natural flavours that complemented each other well. 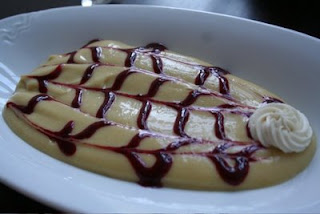 And on top it was very comforting and reassuring to see that I was very familiar with all of the dishes and their preparation methods and could have easily assembled a similar menu myself :-)

I was so motivated, I went home that afternoon and prepared a raw carrot cake from nutflowers, nuts, dates, lemon and orange peel and spices with a creamy, heavenly cashew vanilla frosting. I had to lick the blender after I put the cream on the cake ;-) 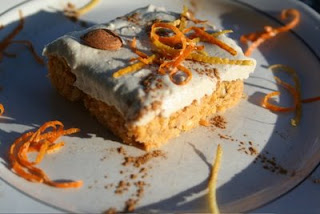 The Saturday lunch experience got me so excited, I had to go back to the restaurant on Sunday evening with my lovely neighbours Philip and Michael to taste chef Björns creations. I was impressed! I had Raw Beet Ravioli with Cashew Ricotta Filling on fresh fennel followed by Zucchini and Bell Pepper "Linguini" with a Cashew Cream Sauce and Marinated Shitake Mushrooms. Both plates were beautifully presented and well composed in terms of both colours and flavours. Also my two friends and raw food newbies were very pleased. The athmosphere of the restaurant in the evening is very intimate. The large dimly lit chandeliers and candles on every table and on the counters and relaxing jazz and piano music in the background create a stylish at the same time cozy and comforting athmosphere. Then, the moment of truth: Raw Blueberry Cheesecake was the seasonal raw food desert of the day. Will it reach the level of "Desert Godess" Gisela's magic Sunday Brunch deserts at the Tree of Life? When it arrived, I was already bought by the presentation: it came surrounded by a marbled duett of a white and dark sauce and with a handful of extra blueberries, m favourite fruit. I spooned the first bite, put it on my tongue, and.... HEAVEN... I wanted to melt away... it passed :-)

The resumé: It's a little out of the way from central Mitte, Kreuzberg or Prenzlauer Berg, but La Mano Verde is a rising star that's certainly worth seeking out on Berlin's new horizon. 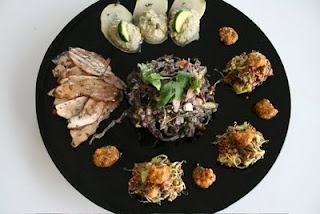 I think that is what I would call this plate in my own restaurant (shall I ever have one): Today's raw lunch at my home café:

Everybody knows the classic chickpea hummus, but who would have thought that zucchini actually makes a much lighter and easier digestible version of it. Sunflower seeds, zucchini, cashew nuts and fresh thyme are blended into a fluffy paste which I served on marinated kohlrabi carpaccio. Its crunchy bite makes it the perfect veggie hummus "cracker".

Red quinoa is a variety that is not much cultivated anymore. A shame, since its nutty flavour makes it a delicous, nutrient dense power grain. Sprouted, it makes a wonderful salad like in this one with avocados, tomatoes, red onion, sprouted lentils, alfalfa, waterkress and radish with a coconut, ginger, garlic, chilli dressing and some fresh coriander, topped with a spicy tomato-apricot-cashew chutney.

And you don't need rice pasta to make a pad thai. Thinly sliced red cabbage, once marinated in a sauce for a while, makes nice "noodles" that go really well with Asian flavours. I added some sunchoke julienne for an extra crunch, yellow bell pepper, fresh cilantro, dulse flakes and cashews for sweetness and wakame slices for even more noodle like teture and a salty sea taste. And of course a bunch of mixed sprouts for an extra enzyme and chlorophyl boost.

The sauce resembles a thai curry (without the additives and processed ingredients in the usual store bought pastes). I used coconut oil, coconut milk, ginger, garlic, chipotle, turmeric, agave, salt and chickpea miso. I could have also used stevia instead of agave to make it a more low glycemic dish.

This was a perfect lunch. All the flavours and textures complemented each other very well and even the colours were abundant: white, yellow, orange, red, green and purple. What a beautiful rainbow plate. I was satisfied :-)
No comments: