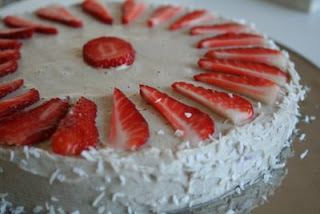 Preparing raw desserts has become one of my favorite activities when experimenting in my raw food kitchen. Not only are they just divinely delicious, but the mere process of creating them absolutely fascinates me. Creating a raw dessert is truly an art. Going through the ingredients list of this beautiful strawberry shortcake I made a few days ago (inspired from The Sunny Raw Kitchen: Recipe of the Week: Strawberry Shortcake), you would not think it is possible to achieve such consistencies like a fluffy nutty cake base and a moussy butter or whipped cream topping. The ingredients are as simple as dried nuts, dried fruit, fresh fruit, coconut butter and agave sirup! 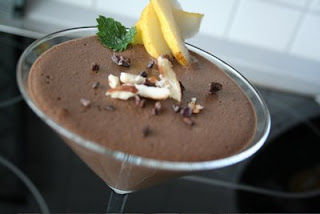 This is pretty much the same for most other vegan raw desserts, like this amazing raw chocolate mousse. The consistency is just like a regular one, airy, fluffy, light and the taste: heavenly, pure, dark bitter chocolate due to using 100% pure raw cacao, one of the most amazing and nutritious super foods on the planet. In its raw form, cacao has 6 times more antioxidants than blueberries, is the highest source of magnesium and has plenty of other benefits.

Not only do raw desserts taste even more delicious than some of their conventional relatives (like this raw version of a pumpkin pie), they are so much more nutritious, and better for your health, completely free from wheat, gluten and dairy and having lower effects on your blood sugar level, they can even be enjoyed by people with severe food intolerances, which become more and more common these days.

Most of these deserts I prepared recently are inspired by San Francisco's raw dessert heaven Café Gratitude. In fact, it was that raw cheesecake during my first meal at Café Gratitude a few years ago, that convinced me of the raw food trail and made we want to become a raw food chef. I just could not believe that there was a non-dairy, sugar free, vegan and raw version of this New York classic that could satisfy me at least as much as the original.

And here I am, 4 years later, making the same pies I once thought were such magical creations. Cheesecake is still one of my favourites. so this blueberry chocolate cheesecake from David Wolfe's book Naked Chocolate also hit the spot. A tangy cream from blueberries, raw chocolate and cashew nuts that tastes just like blueberry cream cheese! 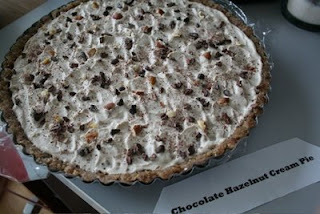 Also this hazelnut chocolate cream pie was an amazing combination of nuts, seeds and chocolate. A hazelnutty crust, filled with a chocolate hazelnut mixture with the consistency of a moussy pudding, topped with a meringue made from coconut, vanilla and lemon.

I liked all of them, but with spring time and the first strawberries in season, the strawberry shortcake was my absolute favorite. The next experiment will be a mango mousse pie! I can't wait to power on my new VitaMix blender. Without this professional power machine, these desserts would not be possible. Due to its shape and the tamper, you can turn anything into a cream and even a thick cream like the one needed for a cheesecake is possible with this power blender. I haven't tried to blend my Iphone yet, but the comparable KTec blender apparently does. Check it out on YouTube :-)